LE JUMEAU (THE TWIN) ON BLU-RAY

Last May, the Museum of the Moving Image hosted “Crime Scenes,” a series focusing on the film adaptations and screenplays of legendary novelist Donald E. Westlake. The weekend of screenings was organized by Levi Stahl, editor of the terrific Westlake collection The Getaway Car, and included John Boorman’s POINT BLANK, the Robert Redford caper comedy THE HOT ROCK and, of course, THE GRIFTERS, for which Westlake earned an Oscar nomination. We attended the opening night of the festival (POINT BLANK) and found the post-screening discussion featuring Stahl, Abby Westlake, Lawrence Block and Luc Sante, to be informative and entertaining.

Although the discussion focused partly on European translations of Westlake’s stories, the film series included only one European adaptation: MADE IN U.S.A., a bizarre Marxist re-imagining of The Jugger directed by Jean-Luc Godard. Later French-language Westlake films -- MISE À SAC, LE JUMEAU, ORDO, and Costa-Gavras’s critically praised LE COUPERET -- were not screened, but they are strong efforts and mostly successful at capturing the author's style. Sadly, those films have eluded American viewers thanks to spotty or non-existent distribution. 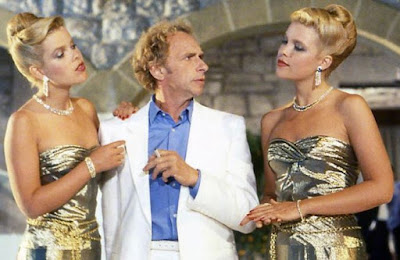 In 1984, director Yves Robert re-teamed with Pierre Richard, the star of his hit comedies THE TALL BLOND MAN WITH ONE BLACK SHOE and its sequel, for LE JUMEAU (THE TWIN), based on Westlake’s 1976 novel Two Much! Never officially released to the U.S., LE JUMEAU only recently became available with English subtitles in a beautiful-looking transfer available on region-free Blu-Ray through Amazon France.

Richard plays Matthias Duval, the womanizing, debt-ridden owner of an adult greeting card business, who invents a brother to woo identical twin heiresses (played by English twins Carey and Camilla More, the same year as their appearance in FRIDAY THE 13TH: THE FINAL CHAPTER). After Matthias seduces Liz Kerner, he slicks his hair back and dons a pair of glasses to become Matthieu Duval, Matthias’s identical twin brother and suitor of Liz’s sister Betty.

When Matthias finds himself engaged to Liz and Betty as part of an inheritance scheme, he’s soon running back and forth between offices and bedrooms, juggling identities in farcical fashion while the Kerners’ cadaverous attorney Ernest Volpinex (Jean-Pierre Kalfon) launches an investigation into the Duval siblings.

The film is remarkably faithful to Westlake’s novel and even uses a few of the tasteless (and often hilarious) greeting card messages. Richard, a deft comic actor, skillfully manages physical humor and projects the sleaziness and dishonesty of his character with surprising charm. Although the final, tonally jarring plot twists of the novel have been omitted -- Westlake purists may object -- director Robert finds an appropriately noir-ish atmosphere and builds tension, particularly in a dazzling sequence in which Matthias flees from a burning house.

Two Much! was adapted again in 1996 as a mostly forgettable comedy (starring Antonio Banderas, Melanie Griffith and Daryl Hannah) that barely resembles the source material.
Posted by The Paperback Film Projector at 1:17 PM