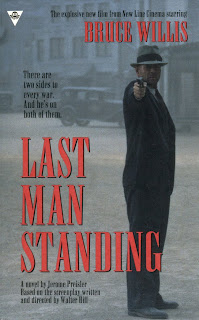 The plot of writer/director Walter Hill’s gangland thriller is nothing original, following A FISTFUL OF DOLLARS and a slew of other unofficial remakes of YOJIMBO (the Sonny Chiba vehicle, KARATE WARRIORS, among them). The original film was itself loosely based on Dashiell Hammett’s Red Harvest, and Hill goes back to the roots of that novel by making his characters Prohibition-era gangsters. At heart, though, LAST MAN STANDING is really a western, as hoodlums lounge around barrooms and duel to the death in a Texas backwater town.

One of these hoodlums is John Smith (Bruce Willis), a gunman who sells his talent to the Irish and Italian bootlegging gangs that have seized control of the town. Smith’s intention is to manipulate the gangs into destroying each other; he also wants to free beautiful Felina (Karina Lombard) from the clutches of Doyle (David Patrick Kelly) and psychotic right hand Hickey (Christopher Walken). Doyle and Hickey eventually wipe out the competing gang, led by obnoxious cousins Strossi (Ned Eisenberg) and Giorgio (Michael Imperioli), and when they learn of Smith’s plans for Felina they capture and torture the lone gunman. But Smith eventually escapes and, aided by a bar-owner and crooked Sheriff Galt (Bruce Dern), plots his revenge.

LAST MAN STANDING, released by New Line in 1996, was shot under two other titles (GUNDOWN, WELCOME TO JERICHO), had its release date pushed back, and featured footage in trailers that never made it to the final cut -- a strong indication of production and test screening woes. The film tanked at the box office and critics despised it; nevertheless, LAST MAN is full of spirited performances and brutal, haunting images.

Early drafts of the screenplay were penned by Henry Bean (INTERNAL AFFAIRS, THE BELIEVER) though Jerome Preisler’s novelization -- like its companion film -- gives sole credit to Hill. Preisler does fine work fleshing out the director’s spare writing style, elaborating on the violent desperation of Jericho and its inhabitants without losing Hill’s terseness and ambiguity. The author is also good at describing action so that it’s exciting and coherent (“The sofa cushions blew into seared, smoking clots of fabric and stuffing and then there was a loud scream and a ribbon of blood appeared under the sofa’s legs”), quite an accomplishment considering that the John Woo-inspired set-pieces of the film seem determined to lose their audience in violent mayhem.

Since screenplay adaptations are usually based on drafts altered during production, there are expected variations from the finished film -- some minor differences e.g., character names (“Rossi” rather than “Strossi”) and alternate dialogue. One subplot, involving a minor character from the Doyle gang who kills a Texas Ranger and is held hostage, was an element borrowed from YOJIMBO and altered for the film to place the focus on Hickey and Giorgio.

Simple-minded Joe (William Sanderson), barman and owner of the Red Bird, was originally Dixie Monday. Like Joe, Dixie provides Smith with background on the gangs and their business in Jericho, filling in gaps between all of the scheming and shooting. Joe was a type and a plot device; Dixie is tough, witty, damaged (“The lines and angles of her face were a lasting record of disappointments … pains known only to women who’d lived hard and been forced into too many compromises with the world”). Whereas Joe seemed mildly irritated, even amused, by Jericho’s corruption and desolation, Dixie is saddened and carries guilt over the state of the decrepit saloon that once thrived under her father’s management. A sweet flirtation develops between Smith and Dixie showing us a gentler side to the gunman, making it easier to comprehend when he goes out of his way to save Felina.

It occurred to me that actress Deborah Van Valkenburgh would have been the right age for Dixie, and I wonder if Hill wrote the part with her in mind: she played a similar role in Hill’s STREETS OF FIRE and was hard-edged prostitute Mercy in THE WARRIORS. In those films Van Valkenburgh projected streetwise confidence with humor and charm, a nice contrast to her emotionally limited leading men. She would have worked well opposite Bruce Willis, who has considerable range but is locked into Clint Eastwood’s tough-and-taciturn routine for the majority of the film. LAST MAN STANDING remains a favorite of mine, an underrated crime thriller, but I find it something of a loss that Dixie never made it beyond Preisler’s book.
Posted by The Paperback Film Projector at 8:28 AM No comments:

May 21, 1973
The Summer That Bled
by Anthony Masters
St. Martin's Press, 1972
This non-fiction account of the life and death of Hannah Senesh was never adapted into a major motion picture. However, Yoel Palgi's books The Diaries Of Hanna Senesh and A Great Wind Cometh were the basis for the 1988 film HANNA'S WAR, directed by Menahem Golan and starring Maruschka Detmers, Ellen Burstyn and Donald Pleasence.