Book Ad of the Week: THE POSEIDON ADVENTURE (1969) 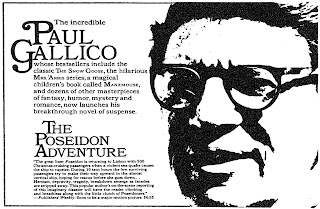 August 17, 1969
The Poseidon Adventure
by Paul Gallico
Coward-McCann, 1969
Posted by The Paperback Film Projector at 9:00 AM No comments:

Email ThisBlogThis!Share to TwitterShare to FacebookShare to Pinterest
Labels: BOOK AD OF THE WEEK, PAUL GALLICO 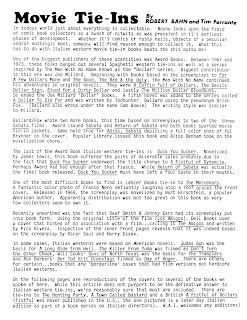 Above from Westerns...All'Italiana!
(Issue #3, September/October 1985) 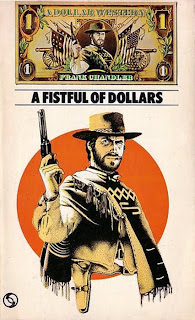 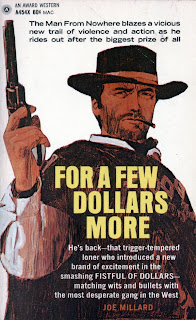 For a Few Dollars More
by Joe Millard
Award, 1969
Novelization 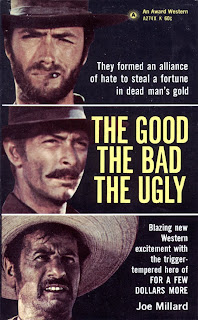 The Good, the Bad, and the Ugly
by Joe Millard
Award, 1967
Novelization (with 3 different covers) 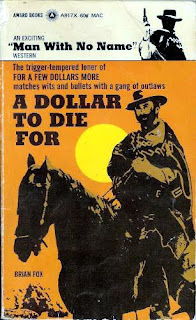 A Dollar to Die For
by Brian Fox [Todhuner Ballard]
Award, 1967
Original novel in a series 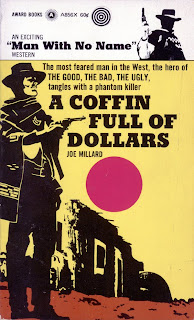 A Coffin Full of Dollars
by Joe Millard
Award, 1971
Original novel in a series 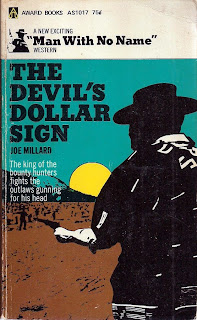 The Devil's Dollar Sign
by Joe Millard
Award, 1972
Original novel in a series 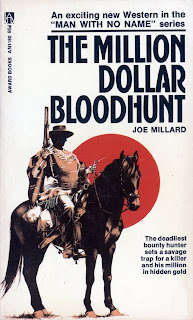 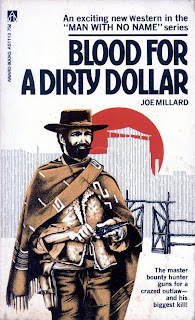 Blood for a Dirty Dollar
by Joe Millard
Award, 1973
Original novel in a series 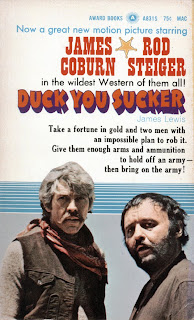 Duck You Sucker
by James Lewis
Award, 1971
Novelization
(Film a.k.a. A FISTFUL OF DYNAMITE) 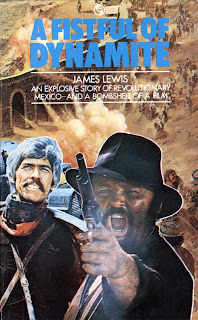 A Fistful of Dynamite
by James Lewis
Tandem, 1971 (British)
Novelization
(Film a.k.a. DUCK YOU SUCKER) 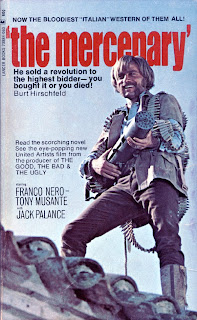 The Mercenary
by Burt Hirschfeld
Lancer, 1969
NOV
(Film a.k.a. A PROFESSIONAL GUN) 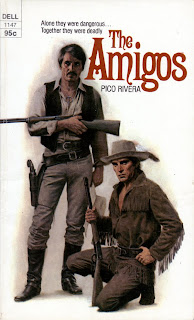 The Amigos
by Pico Rivera
Dell, 1975
Novelization of DEAF SMITH AND JOHNNY EARS (1973) 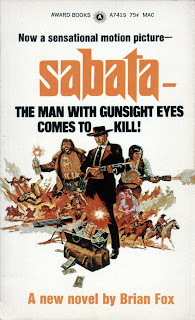 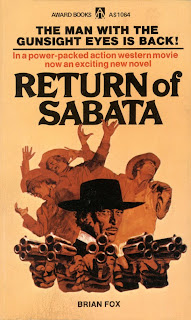 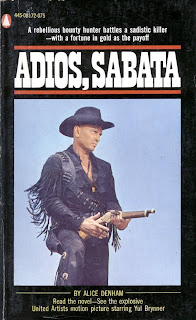 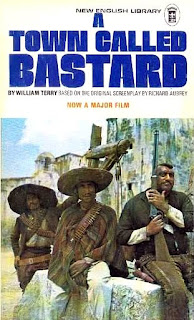 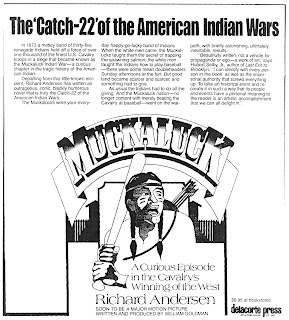 The movie was never produced.
Posted by The Paperback Film Projector at 9:00 AM No comments:

Email ThisBlogThis!Share to TwitterShare to FacebookShare to Pinterest
Labels: BOOK AD OF THE WEEK, WILLIAM GOLDMAN

The movie adaptation was never made.
Posted by The Paperback Film Projector at 9:00 AM No comments:

Books Into Films: Announced in the Trades

Here are just a few of the many book-into-film adaptations that were announced in trade papers (Variety, Boxoffice, Hollywood Reporter) but either never got made or were produced years later with different talent in front of and behind the camera. 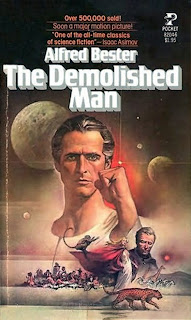 THE CONFIDENCE MAN (1974) -- A Roger Corman production to be directed by Jonathan Demme, from a screenplay by Demme, based on the novel by Herman Melville

CULLA AND RINTHY (1971) – Stacy Keach to write and direct, based on Cormac McCarthy’s novel Outer Dark

DEADLY EDGE (1972) – Based on the novel by Richard Stark [Donald E. Westlake], to be written by Don Peterson and directed by Peter Yates

THE DEMOLISHED MAN (1977) – Based on the novel by Alfred Bester, written and directed by Brian De Palma 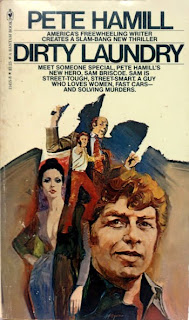 DIRTY LAUNDRY(1979) – Michael Mann to direct, based on a Pete Hamill book

THE EXECUTIONER (1979) – Produced by Burt Reynolds and David Gershenson for 20th Century Fox, based on the Pinnacle action paperback series by Don Pendleton

THE FIRST DEADLY SIN (1974) – To be directed by Don Siegel, based on the novel by Lawrence Sanders (Brian Hutton directed the 1980 movie, which stars Frank Sinatra and Faye Dunaway) 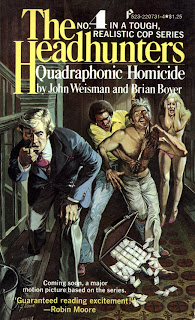 THE HORSE IS DEAD (1978) -- Comedy based on the novel by Robert Klane, produced by Samuel W. Gelfman, directed by Ernest Pintoff

I NEVER PROMISED YOU A ROSE GARDEN (1968) – Starring Natalie Wood and directed by Sydney Pollack, from the novel by Joanne Greenberg (Kathleen Quinlan ended up starring in director Anthony Page's film, released in 1977)

LETTING GO (1965) – Based on the Philip Roth novel, to be produced by AIP and directed by Harvey Hart 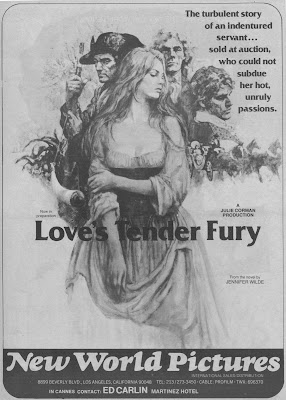 MOTHER HARLEM (1974) – A sequel to ACROSS 110TH STREET, but not based on a novel by Wally Ferris, to be directed by Barry Shear

THE MOVIEGOER (1978) -- A Roger Corman production starring Karen Black and Sam Waterston, based on Walker Percy's novel. Twenty years later, Avenue Pictures announced another production of this (with a screenplay by Terrence Malick), but that also never came to fruition.

NAMUGONGO (1970) – Cornel Wilde to direct, based on a book by Father A. E. Howell of the Order of the White Fathers, from a script by Clint Johnston and Don Peters

PAST ALL DISHONOR (late 1960s) – To be directed by James B. Harris, based on the novel by James M. Cain 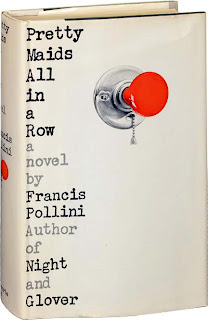 PRETTY MAIDS ALL IN A ROW (1968) – James B. Harris signed to direct a script by William Hanley, based on the novel by Francis Pollini (The movie that was made and released in 1971 was directed by Roger Vadim, from a script by Gene Roddenberry) 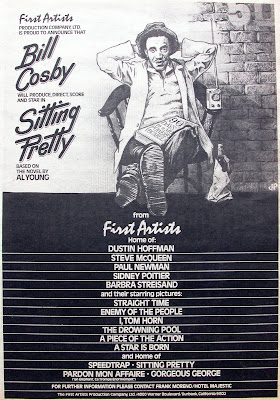 SITTING PRETTY (1977) - Bill Cosby's plan to turn Al Young's novel Sitting Pretty into a feature film unfortunately never came to fruition, although Young did do uncredited rewrites on the Cosby-Poitier comedy A PIECE OF THE ACTION, also for First Artists. 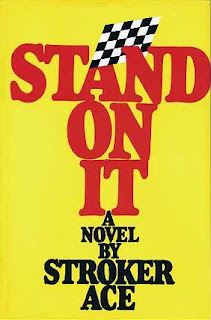 STAND ON IT (1975) – Screenplay by Lukas Heller, based on the novel by Stroker Ace [William Neely & Robert K. Ottum], to be directed by Robert Aldrich, starring Burt Reynolds (Made by Hal Needham a decade later as STROKER ACE, starring Reynolds, from a script by Needham and Hugh Wilson)

Posted by The Paperback Film Projector at 3:38 PM 3 comments:

Email ThisBlogThis!Share to TwitterShare to FacebookShare to Pinterest
Labels: BOOKS INTO FILMS

Book Ad of the Week: NOBODY LOVES A DRUNKEN INDIAN (1967)

September 24, 1967
Nobody Loves a Drunken Indian
by Clair Huffaker
David McKay Company, 1967
This was filmed as FLAP (1970), a.k.a. THE LAST WARRIOR, directed by Carol Reed and starring Anthony Quinn, Claude Akins, Tony Bill, Victor Jory and Shelley Winters.
Posted by The Paperback Film Projector at 9:00 AM No comments: