Soon to be a Major Motion Picture? 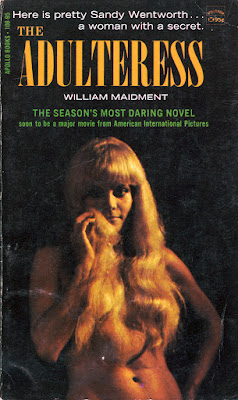 The Adulteress
by William Maidment
Apollo Books, 1971
In the late 1960s, American International Pictures attempted to produce a film adaptation of Philip Roth's novel Letting Go. That didn't end happily, so they tried again with a few more literary purchases, including Public Parts and Private Places by Robin Cook, Venus Examined by Robert Kyle, and Implosion by D.F. Jones. Two of the novels they acquired -- Peter Saxon's The Disoriented Man and Angus Hall's The Late Boy Wonder -- became the films SCREAM AND SCREAM AGAIN and UP IN THE CELLAR, respectively. The others were never produced, though screenplays were commissioned for all of them (Richard Matheson wrote the adaptation of Implosion). AIP must have purchased William Maidment's The Adulteress in galley form, because I've found no indication that it was published prior to this movie tie-in paperback from 1971.

Posted by The Paperback Film Projector at 9:00 PM 1 comment: