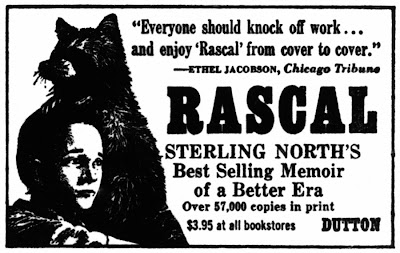 Email ThisBlogThis!Share to TwitterShare to FacebookShare to Pinterest
Labels: BOOK AD OF THE WEEK, WALT DISNEY 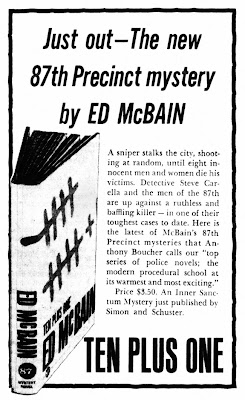 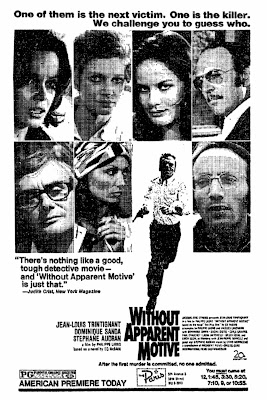 Email ThisBlogThis!Share to TwitterShare to FacebookShare to Pinterest
Labels: BOOK AD OF THE WEEK, ED MCBAIN

THE EXTERMINATOR by Peter McCurtin 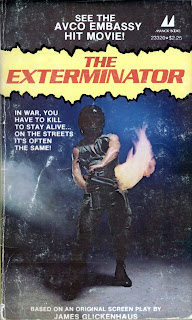 For his second feature film, director/writer James Glickenhaus created the low-budget, brutal vigilante thriller THE EXTERMINATOR (1980), which quickly became a hit with urban grindhouse patrons who were delighted with the skuzzy, twisted movie that went farther than most exploitation epics of the era. Shortly after the film was picked up for U.S. release by Avco Embassy Pictures, the distributor set up a novelization deal. The memorable newspaper ads advised patrons to “Read the Manor paperback original.”

Author Peter McCurtin followed the movie closely as he retold the story of Johnny Eastland, a Vietnam veteran who snaps after his best friend and army buddy is rendered a quadriplegic by the Bronx street gang the Ghetto Ghouls. Calling himself “The Exterminator,” Eastland turns vigilante and utilizes a flamethrower, a meat grinder, an electric carving knife, hungry rats, mercury-laced bullets, and an M-16 rifle to rid the city of numerous thugs (including the Ghetto Ghouls), mobsters, pedophiles, and one highly trained, mafia-employed attack dog. As the colorful back cover copy explains, “John Eastland uses a Smith & Wesson Combat Magnum with an eight-inch barrel. He drills out the tips of his slugs and loads them with mercury. Whey they hit a scumbag’s belly they blow up like a hand grenade. John calls that his rat load.” Meanwhile, the NYPD detective in charge of the Exterminator case, James Dalton, realizes he has a few things in common with the loner vigilante he’s out to bust, and unfortunately gets caught in the crossfire when the CIA meddles in his investigation.

McCurtin (not a pseudonym) was responsible for writing dozens of men’s adventure novels in the 1970s, including three vigilante-themed series -- The Marksman (published by Belmont Tower), The Sharpshooter (Leisure Books), and The Assassin (Dell) -- so this was no doubt a quick and easy paycheck for him. His 1970 novel Mafioso had been the basis for Fernando Di Leo’s THE BOSS (1973), a vicious Eurocrime movie starring Henry Silva and Richard Conte, but with THE EXTERMINATOR he was presented with the flipside experience: writing his own novel from someone else’s feature film. Because Glickenhaus’ screenplay is short on exposition and almost comically devoid of segues, McCurtin was left with plenty of room to expand and create backstory, alter existing situations, and even toss in a few additional supporting characters with their own plot tangents.

For example, in the movie it’s never explained where Eastland gets the flamethrower, machine guns and other weaponry; the viewer just assumes that, like so many other veterans, he brought it all back with him after the war. In the novel, McCurtin points out that Eastland is unlike other veterans because he doesn’t have automatic weapons mothballed in his apartment. The reader is then taken on an eight-page tangent in which Eastland rips off Fordham Road pawnshop owner Shecky Brill, who is something of a legend thanks to his 40-year sideline career as an illegal gun dealer whose customers have included Israel, the IRA, and Dutch Schultz! Eastland walks out of Shecky’s warehouse with M-16’s, S&W .44’s, Schmeissers, commando knives and plenty of ammo.

In the movie, to learn the location of the Ghetto Ghouls’ clubhouse, Eastland uses a blow torch to menace gang member Frankie (Dennis Boutsikaris), leading to the first instance of the Exterminator’s catchphrase, “If you’re lying, I’ll be back.” Frankie survives the scene but is later killed by Eastland after mugging an elderly woman in the park. For the novel, McCurtin plays the blow torch interrogation the same way, but replaces Frankie with a Puerto Rican punk named Vinny, who Eastland guts with a commando knife after learning the whereabouts of the Ghouls hangout. The gang member shot by Eastland after the park mugging is never given a name, so there is no Frankie in the novel.

There’s no catchphrase either, because McCurtin also changes the second scene in which Eastland tells someone, “If you’re lying, I’ll be back.” Perhaps the most crowd-pleasing moment in the movie -- Gino Pontivini being lowered into a large meat grinder and chopped into chuck -- is completely deflated in the novel by having the mobster already dead of a heart attack when the bloodied and furious Eastland returns from his encounter with Pontivini’s security Doberman. If there was a point to this particular revision, it was lost on us.

Otherwise, McCurtin’s pulpy prose perfectly captures the movie’s cynical, downbeat tone. Choice passages include, “There was a fountain of arterial blood and the head fell and bounced” and “Spit was mixed with blood and a pink, frothy bubble formed between his lips and bobbed there for a moment before it broke.” Containing 16 pages of color publicity stills, the novelization of THE EXTERMINATOR is a compelling read and a highly-prized collectible worth seeking out, even for longtime fans who have the film memorized.
Posted by The Paperback Film Projector at 9:13 AM 1 comment:

"There came a time when fear was transmuted into stimulus, and the moments of danger which had once brought terror now brought only a keener sense of being alive." 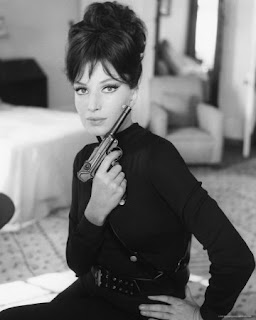 Modesty Blaise: striking, sophisticated, and lethal, she retired as head of a criminal organization with her devoted right-hand Willie Garvin; wealthy and bored, the two freelance for Sir Gerald Tarrant of Special Intelligence, accepting only the most dangerous assignments. Modesty and Willie made their first appearance on the comic pages of the London Evening Standard in May 1963, and proved so popular that their creator, Peter O’Donnell, continued to feature them in stories for 38 years. Though the comics continued over several decades, a related book series was just as important in keeping the characters alive. O’Donnell’s debut novel, Modesty Blaise (1965; Souvenir Press), was based on a story for an unsuccessful action spoof directed by Joseph Losey. 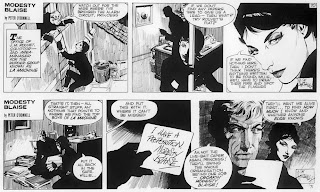 Within a year of the comic’s premiere, O’Donnell was approached about turning the strips into a film. He completed a screenplay using elements from a pair of stories published in the Standard, “La Machine” and “The Gabriel Set-Up." The film that resulted bears little resemblance to his work. In an interview for Comic Media, O’Donnell claimed that his writing had been altered “first by an Englishman, then by an Italian lady (in Italian)... translated back into English... rewritten by a West Indian, and finally polished off by an American” (8). The film in its released form (with Evan Jones credited as screenwriter) retains the basic story but adds bizarre, unfunny sight gags -- Modesty’s inexplicable changes in costume, for one -- and, according to O’Donnell, only uses three lines of his original dialogue (8). Not surprisingly, the author rewrote his story as a novel. 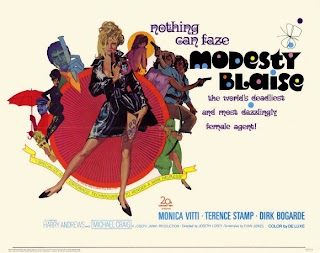 Like the film, the novel’s villain is Gabriel, a sociopathic criminal mastermind plotting to hijack a government shipment of diamonds en route to an oil sheik in Lebanon. Accompanying him are the obnoxious hired gun McWhirter and butch Mrs. Fothergill, who is introduced gleefully breaking the neck of a British agent. Modesty, at Tarrant’s request for assistance, stages a falling-out with Willie on the French Riviera to mislead their targets, then uses herself as bait to gain access to Gabriel’s ship. The hijack goes as planned but at the hideout, an island monastery somewhere in the Mediterranean, Modesty and Willie plot their escape with the diamonds.

Losey’s film was only superficially faithful to its source, and O’Donnell’s novel, with its warm, complex characters, exciting action scenes, and lack of camp, is far superior. The heart of the book’s success comes from Modesty and Willie’s chemistry, an unusual (platonic) relationship that transcends the genre’s contrived plotting. Noble and wise but tainted by experience, Modesty and Willie are two of the smartest and most credible of adventure series protagonists. 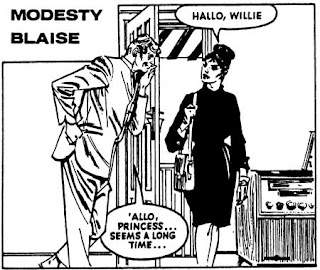 O’Donnell wrote fight scenes in vivid, thrilling detail, capturing the fear and adrenaline rush experienced by his characters. A brutal match between Modesty and Mrs. Fothergill was not properly staged for the film and featured two actors (Monica Vitti and Rossella Falk) who were out of their element, but in the novel we get a strong depiction of every strike and parry.

The villains are also distinctive, and Gabriel has many chillingly memorable moments. First appearing in comic strip form in “The Gabriel Set-Up” (he would return for “The Head Girls” and the fourth Modesty novel, A Taste for Death), Gabriel’s businesslike approach to torture and murder, his casual brutality, an obsession with Tom & Jerry cartoons - the man is unsettling to the point that we fear for his enemies. It’s too bad Losey had Dirk Bogarde, a wonderful actor not well served by the material, playing him for laughs. 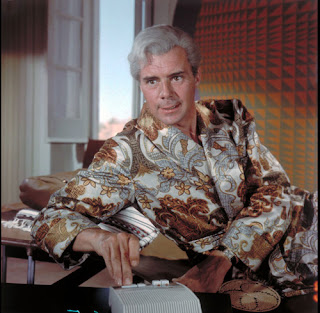 Speaking for Comic Media, O’Donnell claimed that as part of the contract between Beaverbrook Newspapers, owner of the Standard, and the film’s producers, the “essential characteristics” of Modesty and Willie could not be altered. Therefore, some of the more outlandish ideas proposed by other writers never made it to the screen. One written scene O’Donnell objected to -- and had removed -- was an opening credit montage that featured Modesty cold-bloodedly murdering a succession of enemy agents (one has his throat removed with steel talons). Sadly, the author could not block Losey’s campy, condescending approach, a fatal miscasting of the great Monica Vitti, and some ridiculous musical numbers. 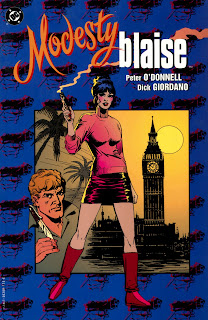 Far more faithful is DC Comics’ superb 1994 adaptation, written by O’Donnell with illustrations by Dick Giordano. There are minor differences and dialogue has been simplified, but generally this is closer to what was intended for the big screen. The characters are drawn to resemble the work of original penciller Jim Holdaway and successor Enric Badia Romero, neatly placing the graphic novel into a kind of continuity with the strips (sleepy-eyed Gabriel, in particular, seems to have emerged from Holdaway’s sketches). And Giordano has fun in the panels, whether recreating a Road Runner short to illustrate the villains’ entertainment break, or amusingly playing up differences in height between the irascible Fothergill and taunting McWhirter. A remarkable achievement, the graphic novel is a must for fans. It’s a shame that DC Comics could not move enough copies to justify adaptations of the remaining books. 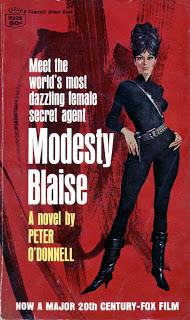 Posted by The Paperback Film Projector at 8:33 PM No comments: