A STUDY IN TERROR by Ellery Queen 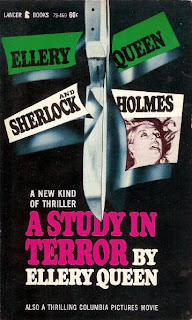 Ellery Queen, the erudite master detective who first appeared in The Roman Hat Mystery (1929) and documented his cases as a series of mystery stories, was both the character and pseudonym created by Frederic Dannay and Manfred Bennington Lee. The Brooklyn-born cousins had a system that produced highly successful mysteries for decades: Dannay outlined the stories and Lee would develop them as novels. At some point in the late 1950s Lee suffered writer’s block and was unable to keep up his part of the collaboration. Beginning with Theodore Sturgeon on The Player on the Other Side (1963), other authors were hired to expand Dannay’s outlines, and the cousins paid a flat fee to crime fiction specialists -- including Stephen Marlowe, Talmage Powell, and Richard Deming -- for a series of paperback originals under the Queen sobriquet that were edited by Lee (Nevins 4). Lee eventually returned to work with Dannay on the main series of novels until his death in 1971. Edward D. Hoch, who ghosted The Blue Movie Murders, said that one of the late-period Dannay/Lee collaborations was the framing material for the novelization of A Study in Terror (http://neptune.spaceports.com/~queen/The_Other_Side_
Hoch.html). This is not surprising when one considers the framing story has Queen experiencing writer’s block as he tries to make a book deadline.

Ellery brooded.
For a reasonable time.
After which he got up from his typewriter, seized ten pages of doomed copy, and tore them into four ragged sections.
He scowled at the silent typewriter. The machine leered back. 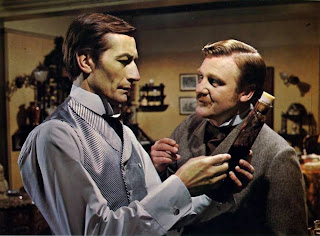 The film A STUDY IN TERROR (1965) puts Sherlock Holmes (John Neville) and Dr. John Watson (Donald Houston) on the trail of Jack the Ripper in 1888 London. The Whitechapel district has been shaken by a series of murders targeting prostitutes. At 221B Baker Street, Holmes receives a case of surgeon’s tools minus the post-mortem scalpel and suspects the kit was sent as a clue to the Ripper case. Holmes and Watson set out to contact the kit’s owner based on a coat of arms imprinted in the fabric. Their search leads them to an aristocratic family entangled in a web of blackmail and murder. 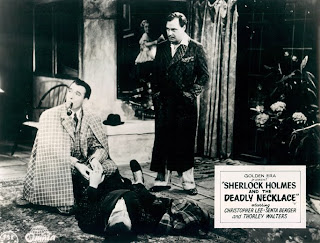 The idea of having Sherlock Holmes take on the Ripper case was intended to be used for a sequel to SHERLOCK HOLMES UND DAS HALSBAND DES TODES a.k.a. SHERLOCK HOLMES AND THE DEADLY NECKLACE (1962), a West German/Italian/French co-production loosely based on Conan Doyle’s The Valley of Fear and starring Christopher Lee and Thorley Walters. Producer Artur Brauner of CCC Film -- the company behind a series of Edgar Wallace krimis -- had a falling-out with associate producer Heinrich von Leipziger a.k.a. Henry E. Lester, legal copyright representative for the Conan Doyle estate. The film concludes with a set-up for a Ripper story, and the sequel was announced in a German newspaper (Barnes 208). Presumably because of his rift with Brauner, von Leipziger went to England and set up a Holmes/Ripper project with Michael Klinger and Tony Tenser of Compton Films, in collaboration with American producer Herman Cohen (best known for KONGA and HORRORS OF THE BLACK MUSEUM). Donald & Derek Ford are credited for the screenplay of A STUDY IN TERROR, though Cohen claims to have done rewrites with director James Hill and H.A.L. Craig (ANZIO, WATERLOO) (http://www.hermancohen.com/interview-attack5.html). The story would inspire John Hopkins’ screenplay for the 1979 British/Canadian co-production MURDER BY DECREE (also featuring Frank Finlay in the role of Inspector Lestrade). 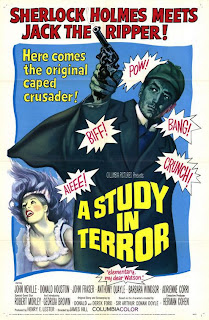 For the U.S. release Columbia Pictures commissioned a novelization (Lancer, 1966). Though Ellery Queen is the only author credited, Francis M. Nevins (Royal Bloodline: Ellery Queen, Author and Detective) told me the Holmes section was penned by sci-fi writer Paul W. Fairman. In the style of Arthur Conan Doyle, Fairman developed the novelization as a first-person account by Watson. He does commendable work approximating Conan Doyle’s literary voice and departs from the film in several interesting ways. In one sequence Holmes chases the wrong suspect and fails to stop another of the Ripper’s gruesome murders. The detective’s resulting guilt and self-doubt add a vulnerability missing from the film’s portrayal.

Holmes was on his knees, back bowed, head lowered, a picture of despair.
“I have failed, Watson. I should be brought to the dock for criminal stupidity.” 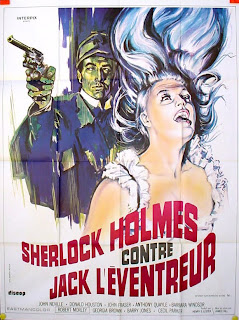 Holmes’ equally brilliant brother Mycroft is also fully realized, less obnoxious and adversarial, and has a wonderful scene where he and Sherlock identify the occupations of two men they observe in the street. Also, since the story is told entirely from Watson’s perspective, it is missing the film’s awkwardly staged murders. 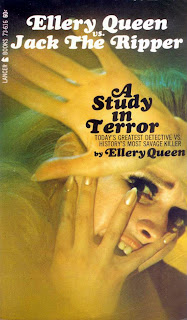 Dannay and Lee wrote a contemporary framing story not included in the film. In an upper East Side Manhattan apartment, Ellery Queen tries to complete his latest novel. Playboy Grant Ames arrives holding a manuscript found in his car after a drunken soiree, a manuscript purported to be a heretofore lost adventure of Sherlock Holmes by John Watson. True to Conan Doyle’s conceit, Grant and Ellery accept the existence of Holmes and Watson as “real” detectives; Ellery, however, tries to determine the authenticity of the manuscript while Grant tracks down its owner. The contemporary scenes alternate with the Watson testimony in a rather contrived way, as Ellery is repeatedly tempted away from his work to read another chapter of the manuscript. Ellery soon realizes there may be a different killer based on his interpretation of events and the appearance of an elderly woman with ties to the aristocratic family. 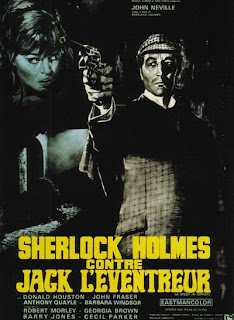 Fairman’s text alters the film’s positioning of revelations (e.g., a final clue that Holmes uses to reveal the killer is presented at the halfway point) to let Dannay and Lee work in a clever twist. It’s too bad Lee’s writing is sloppy and seemingly dashed off in haste, as if he lost interest or had another bout of writer’s block. Queen novels are known for their wit, but the verbal sparring of Ellery and Grant never seems fully developed. This is an amusing way to open a chapter, though:

The apartment bell was a carved rosebud set in ivory leaves. Grant Ames jabbed it, and the       result was a girl wearing poisonous-green lounging pajamas. 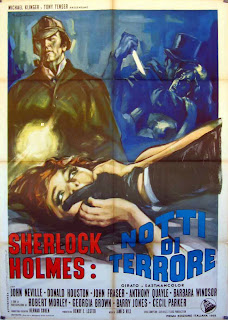