THE FACE OF NIGHT by Bernard Brunner 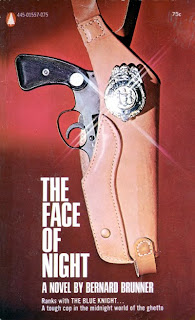 It’s ironic that when The Face of Night reached the big screen in 1974 as HANGUP, the race of every character had been switched from white to black or vice versa; nearly everything that transpires in Bernard Brunner’s unrelentingly downbeat 1967 crime novel has its roots in the racial “hang-ups” of its protagonist, Fred Ramsey, a white rookie on the Chicago Police Department’s undercover narcotics squad. A knee-jerk liberal instantly at odds with his fellow officers, Ramsey is more crusader than cop, not unlike Michael Moriarty’s character in REPORT TO THE COMMISSIONER. Realizing he can’t change the racist views of the other white cops, Ramsey works against them by siding with Lester Tillman, the only black officer in the precinct, who’s been framed on a drug rap by Ramsey’s redneck partner. Ramsey’s extracurricular investigation gets Tillman cleared of all charges and the two are paired as partners, but Ramsey immediately strains the relationship by going off on another one-man mission: to save the life of Kitty Fitzgerald, the high school crush he still carries the torch for, who is now a hopeless junkie streetwalker. Ramsey pressures Kitty to go cold turkey, coerces her into a romantic relationship, and then leaves her once he determines she’ll never again be the same girl he longed for in high school. His next mission: to destroy Richards, the black dope-dealing pimp who destroyed the ideal Kitty by hooking her on smack and turning her out. Ramsey’s twisted hunt alienates him from everyone, especially Tillman, who sadly watches his friend and partner become more obsessed and racist with every passing day. Even Ramsey himself realizes he’s out of control:

“Day and night he kept thinking about Richards; the dead black face was in his mind like a bruise, like an ugly shadow that wouldn’t go away. He had to get him if it was the last bust he ever made. There was no reason for anything else; it was the only meaning left in his life. And every day he chased the Negro peddler deeper and deeper into loneliness.

For no reason at all he began to feel afraid. He had a sense of danger, a sense of doom coming, and night after night he woke up in his bed in the empty house, cold and sweating with nightmares. Richards was the boogeyman of his childhood when he’d hidden his head under the blankets, his face was the face in the moonlit window over his bed, he was the darkness crawling out of the corner and sliding toward him, covering him, suffocating him.

Fred’s face grew sharper and his forehead was cramped with a permanent frown, pimples burned on his cheeks and on his stunted chin. Richard remained as far away as ever. Then one day he discovered that he had forgotten what Richards looked like. He could remember his voice and the brutal grip of his fingers, but when he tried to call up his face the features smeared into a dead blackness. All the Negro faces he looked at were the same dark smear, ugly and swollen. He hated all of them. With a kind of despair he realized that he wasn’t hunting Richards any more. He was hunting all of them, all Negroes.” 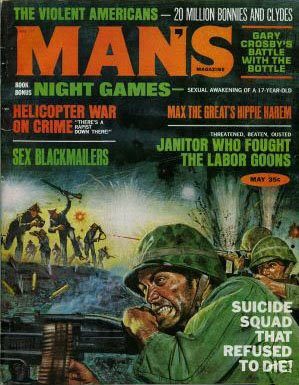 (Above: Issue of Man's magazine featuring an excerpt from The Face of Night)

(Below: Artwork accompanying the excerpt) 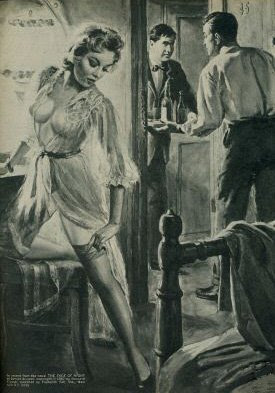 Ramsey nails Richards at the end, but the price is too high: Tillman is dead, Kitty is back turning tricks and shooting dope, and Ramsey is left alone without a friend in the world. Even by early ‘70s standards a faithful film adaptation of The Face of Night would’ve been a colossal bummer -- so white rookie Fred Ramsey became black rookie Ken Ramsey, his black partner Lester Tillman became white partner Lou Tillman, the white Kitty Fitzgerald became black Julie Turner, and black pimp/dealer Richards became white pimp/dealer Richards. Presumably Ramsey’s racial issues are downplayed in the film; the “hangup” refers only to his feelings for Julie, who is killed by a lethal “hotshot” given to her by Richards (In the book Kitty survives because Ramsey gets to Reynolds before he can sell her a bad batch). 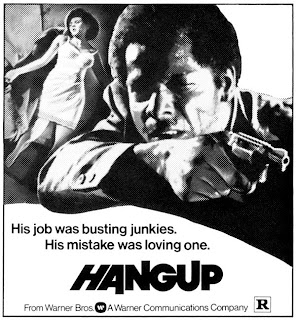 Warner Brothers evidently didn’t have enough faith or interest in HANGUP to even bother proofreading the press materials -- actor Glynn Turman is credited as Sergeant Becker in the pressbook's plot synopsis, when the role was actually played by Wally Taylor (who’s listed in the credits of the same pressbook!) -- and dumped it after a fleeting theatrical release in October 1974. Dimension Pictures acquired it in early 1975, changed the title to SUPER DUDE and played it off in urban action theaters for the rest of the decade on double and triple bills with the company’s other black-oriented action flicks (Interestingly, another Brut production picked up by Warners, the Laurence Harvey horror film WELCOME TO ARROW BEACH, was also sold off to an independent distributor and re-titled). When Dimension went belly-up in April of 1981, schlock outfit 21st Century Distribution bought 80% of their library and proceeded to re-release all 28 films on double bills in the New York tri-state area ahead of the inevitable home video sales (mostly to Continental Video). SUPER DUDE never made the leap to VHS but continued to haunt inner-city theaters until the mid ‘80s, when Bill Landis of Sleazoid Express called it "Hollywood hack Henry Hathaway's idea of blaxploitation" and dismissed it with one additional sentence: “What could be more far-fetched and off the target than having a black narc as a hero?” How about the idea that Fred Ramsey in The Face of Night could be considered a hero -- now that’s far-fetched and off target.


For more on HANGUP/SUPER DUDE, visit
Temple of Schlock. 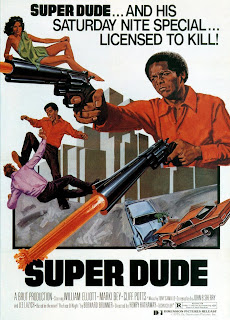 Posted by The Paperback Film Projector at 9:00 AM